When writing this post it’s Easter time. One thing to do during the Easter is to learn how to solve a Rubik’s Cube. A year ago my daughter learned to solve the 3x3x3 Rubik’s Cube, and we just played with it again this week. A lot of people think solving the cube is cool but difficult and are impressed. At the end of the day solving the cube is not difficult, it just takes a few days of hard work. Here is a quick overview to get you started, and at the end of this blog post I have included a video of my daughter solving the cube. 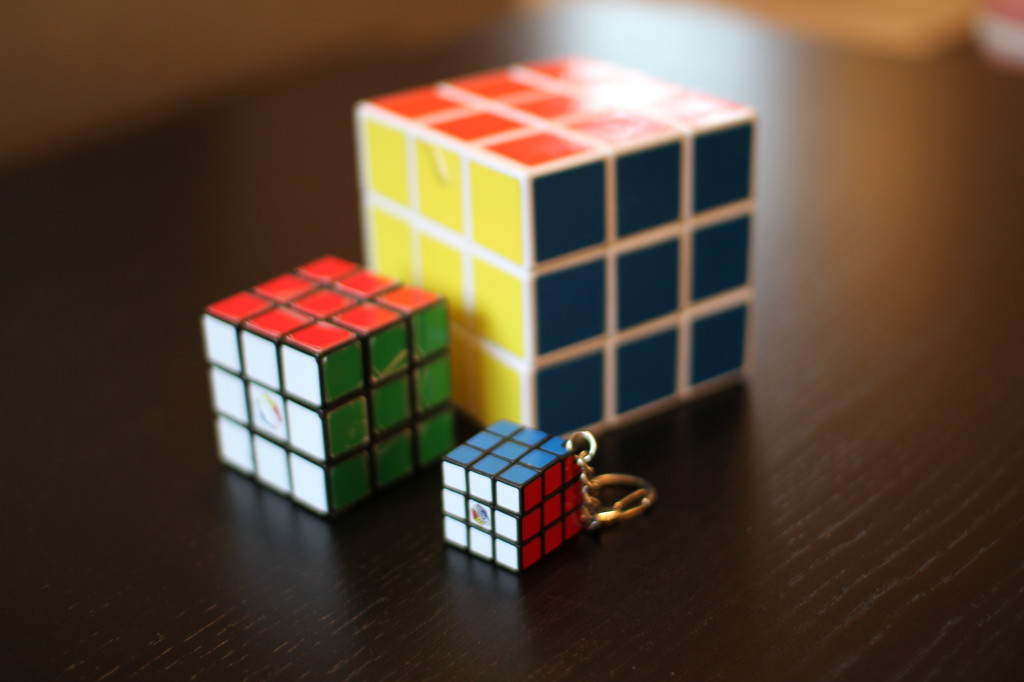 You could use several different strategies when solving the 3x3x3 Cube. Strategies like ´Layer by Layer´, ´Block´ and ´Corner first´ all have variations with different methods. I think the easiest way is to use a ´Layer by Layer´ approach. This strategy is a good solution for beginners. If your goal is to do speedcubing and try to set a world-record, then you need to apply a faster method. Here you can read more about the history of the Cube and different strategies for solving it. If you start searching a lot of the stuff are heavy mathematics and algorithms etc. It’s easy to get all sweaty and discouraged, but I just skipped the nitty gritty stuff and just set some ambitions for us to learn how to actually solve it – in an easy way.

So going for the easiest solution to learn a kid we focused on the Layer by Layer approach. Applying the layer method we solve one layer at a time. We first solve one side of the cube (typically the top layer), then the middle layer, and finally the last layer. Different strategies within the layer method exists and it is possible to optimize towards speed. Typically some guides use a method where you solve the final edge pieces at the end other solves the corners as the last step. I am using the approach where the last thing I do is to solve the corners.

Solving it step by step could be done in seven steps:

Here is an official guide to solve it. This guide uses the approach of solving the edges last. Another guide inline with the approach I am using can be found here.

To solve it you need to learn the move notations. It seems that most Cube enthusiasts use a notation developed by David Singmaster. But for solving the Cube using the method in the link above you just need to memorize the following move notations:

A letter with an “i” after it means an inverted or counter-clockwise move when looking at the face directly. If the algorithm says F, then you should turn the front clockwise. If the algorithm says Fi then you should turn the Front counter-clockwise. The solutions guide is pretty easy stuff, and all the moves are explained visually.

Everything is explained in the solutions guide, but I’ll walk through how I solve it because I have simplified it a bit, and also doing it in a bit different order than the guide.

1. Solve the cross on first layer
The first step is to get a cross. Just pick whatever side you feel for. Remember that the colors must match. The Edge piece colors match the top center piece and the side center pieces.

The algorithm to be used are:
Ri-U-Fi-Ui

The algorithm to be used are:
Ri-Di-R-D


3. Solve middle layer
Great, now you can start solving the next layer. I find it easier to turn the cube upside down now. The first layer solved should now be at the bottom.

Now you should have a cube with to layers solved. Cool! Time to solve the last layer.

The algorithm to use is:
F-R-U-Ri-Ui-Fi


I use a different procedure than they guide now and solves it in a slightly different order. Let’s walk through how I solve it from here:

5. Place the cross on the last layer correctly
Sometimes you get lucky and the cross is correctly placed. But if it is not, you need to move the edge pieces to the correct side of the cube.

The algorithm to use is:
U-R-Ui-Li-U-Ri-Ui-L

The algorithm to be used is:
Ri-Di-R-D


Finally.. here is a video of my kid solving the Rubik’s Cube using the approach described above. Kids really love the cube and be able to actually solve it is a great experience for them!